Anyone who has experienced the luxury of using a freshly warmed towel from a towel warmer will understand why purchasing and installing a towel warmer has become one of the fastest growing bathroom trends of the past few years. It is important to know the different types of towel warmers that are available on the market and their uses to help you more accurately make a decision about which will be perfect for your own bathroom. We have also made a list of some of our favorite towel warmers with some information about each to better inform you in your own shopping experience.

Towel Warmers come in three main styles – wall-mounted, freestanding, and bucket – and each is suited to a different bathroom type. Whether your bathroom is small or big, or you rent or home, many other factors are essential to consider while shopping for the perfect towel warmer.

Wall-Mounted Towel Warmers are usually hydronic towel warmers since they are attached to the wall for easy access to the plumbing system of the home. However, there are many electric towel warmers that are designed to be mounted on the wall as well. The main advantage of wall-mounted towel warmers is that they save on floorspace in smaller bathrooms, or can be hung right near showers or baths to make sure you have a fresh towel right on hand when stepping out. They are also out of the way of people or pets who could potentially bump into a towel warmer freestanding. Wall-Mounted Towel Warmers are not ideal for people who rent their homes, as they require secure mounting materials to be put into the wall to hold the towel warmer into place. Wall-Mounted Towel Warmers also provide a lot of heat, with some even being able to act as small heaters to help heat up your bathroom on those cold winter mornings.

Freestanding Towel Warmers are towel warmers that are on stands and can be moved easily from room to room or different spots in the same room for ease of use anywhere. Freestanding towel warmers are always electric and are simple to use as they just require an outlet to be close to operating. Since they take up a lot more floorspace than wall-mounted towel warmers they aren’t usually ideal for small bathrooms. Still, there are some freestanding towel warmers being made specifically for these smaller bathrooms as well. Freestanding Towel Warmers aren’t just great in bathrooms, because of their mobility they can also be used effectively in laundry rooms, entryways, or mudrooms to dry anything from linens to gloves and hats on cold winter days.

Bucket Towel Warmers are large, hamper-style bins with lids on top of them. They can be large and are usually used to dry linens or multiple large towels at the same time. Because of their large size, they aren’t ideal for some bathrooms, but they are very effective at their job of drying larger items, as well as multiple smaller items. 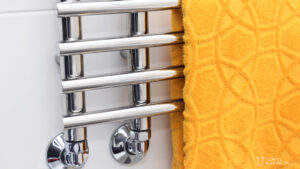 Table of Contents The History of Towel Warmers: During the late 1900s in Europe, modern plumbing began gaining more prominence. The tubing provided an opportunity 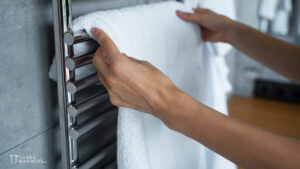 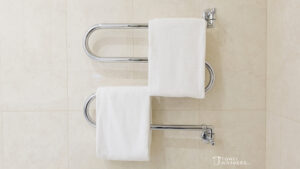 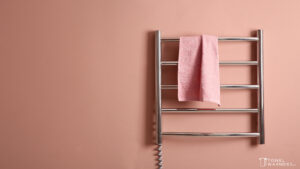 Do Towel Warmers Dry Your Towels? 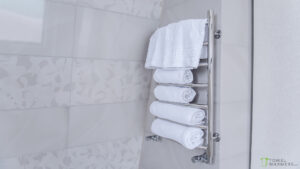 How Much Do Towel Warmers Cost?

Table of Contents You have had enough! It’s time for you to elevate your daily routine. No more cold towels for you and yours. The

Top Towel Warmer Brands of 2022 Towel Warmers are quickly becoming the most popular addition to bathrooms across the country in 2022. Everyone can enjoy

Zadro Extra Large Towel Warmer – This bucket-style towel warmer has a small price tag while being big on every feature that you could want. A large capacity bucket that can hold 2 large bath towels easily and features multiple time settings. One of the best features is the aromatherapy dispenser filled with lavender essential oils that leave your towels with a lovely, relaxing smell to help you destress after an already relaxing shower or bath.

Amba Wall-Mounted Towel Warmer – This hardwired, wall-mounted towel warmer features 10 rails designed to hold multiple towels at the same time. Each of the rails is made of a scratch, chip, and rust-resistant material for an extra-long lifespan of daily use. It comes in five different finishes – matte black, brushed nickel, polished steel, satin brass, and polished gold – so that it can match any existing bathroom design. The towel warmer is also great for quick use since it can reach temperatures of 149 degrees in only 15 minutes, which means you’ll never have to worry about wet towels again.

Innoka 2-in-1 Towel Warmer – This freestanding towel warmer is a fantastic option if you are looking for a small, versatile, and mobile towel warmer. With 6 racks it can comfortably hold any towel while also not taking up much space in the bathroom. All it takes to operate is an outlet and flipping the on the switch and you’ll have dry and warm towels in less than 30 minutes. It can also easily be moved to other rooms, like a laundry room, that might only need to use the towel warmer every once in a while, making it a great option for those who want a towel warmer for multiple purposes.

WarmlyYours Tahoe Electric Hardwired Stainless Steel Towel Warmer – A modern and sleek, hardwired, wall-mounted towel warmer that features 7-bars designed to hold any towel or bathrobe. Since it is hardwired, there will be no wires shown when hung which keeps walls looking clean. It features overheating protection so that if the towel warmer ever reaches over 150 degrees it will automatically shut off, preventing the towel warmer from becoming too hot or possibly overheating. It also comes in three finishes – shiny gold, polished black, and matte black – to match any bathroom aesthetic.

Anzzi Eve 8 Bar Wall-Mounted Towel Warmer – This 8-bar wall-mounted towel warmer also features a handy shelf on top for storing towels after they’ve been dried which is very handy for those who want to save even more space in their bathroom. This warmer can comfortably hold two large bath towels at the same time and heats up very quickly. The wall-mounting keeps the wires from being out in view and the on/off button is on the underside of the bar, keeping a sleek look throughout the whole towel warmer which is great for a modern bathroom.

ICO Savoy Hydronic Steel Towel Warmer – This hydronic towel warmer connects directly to your home’s hot water pipes and then has that hot water circulated through the railings to heat them up quickly and effectively. This unit has 16 bars, so it can hold anything from large bath towels to linens all at the same time if you want. Most hydronic towel warmers can provide heat to the bathroom as well as their towel drying duties, and this warmer is no exception, doubling as a great heating source for your bathroom, especially on those cold and dark winter mornings.

BBEE.TECH Towel Warmer Heated Towel Rack – This is a modern style, wall-mounted towel warmer that features 10 curved bars. It features a timer that can be set to your usual bathing time so that you always have a dry and warm towel every time you go to bathe. It can hold multiple towels and bathrobes comfortably which is great for family use in a high-volume bathroom. It is also one of the fastest heating towel warmers on the market, reaching an optimal temperature in as little as 5 minutes so as soon as you step out of the shower you’ll always have a dry, warm luxurious towel waiting for you.